Weld positioners securely hold, lift, and rotate large weldments so that a welder can access the weld area in an optimal orientation, enhancing weld quality, speed, and safety over stationary weldments or those handled by chains, lift trucks, cranes, belts, screw systems, and hoists.

Today every manufacturer is being forced to do more with less. Improving throughput, quality, and safety are challenges that all manufacturers face. As hiring and retaining qualified employees gets tougher and tougher, metal fabricators are looking for better ways to attract competent employees and also to automate their processes.

The larger the weldments and fixtures, the larger the hazards, the greater the frustration with out-of-position orientation, and the more time is wasted. The use of weld positioning equipment is one way that fabricators can make parts faster, better, and more safely than with standard material handling equipment..

Generally, positioners can be categorized as single column or headstock/tailstock. A positioner holds, lift s, and rotates a part or tooling, like a chicken rotisserie. Typically, the weldment is held in a fixture that is bolted securely to the headstock and tailstock or column. 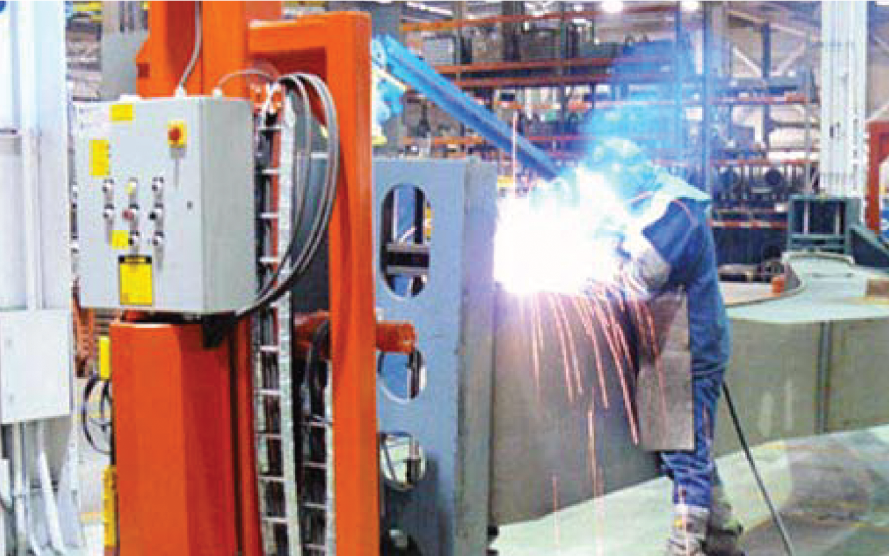 Positioners control the rotation of the part with different types of rotators that allow for 360 degrees of rotation and access to the part. The positioner’s headstocks and tailstocks control elevation and are synchronized to stay level (see Figure 1). Most parts are held in the fixtures as close as possible to the center of gravity. By attaching to the center of the part, a positioner that has 68.5 in. of vertical travel can rotate a part that is over 140 in. wide. This is a useful functionality.

The positioner can lift a part to provide clearance for rotation, rotate the part, and then lower it back By Kevin Toft down to give the welder access to the work area. All of this can be done in minutes with only one person.

Whether manual, intelligent assisted (semiautomated), or fully programmable, robotically integrated, each type of welding positioner can help metal fabrication manufacturers increase their production rates and improve weld quality while reducing hazards. These improvements are accomplished in a few different ways.

1. How Do Positioners Enhance Safety?

Good Ergonomics, Fewer Hazards. The impact of good ergonomics and fewer hazards that weld positioners can have on your workforce cannot be overstated.

Cranes, Chains, and Forklifts. The standard material handling methods that rely on chains, cranes, belts, screw systems, fork trucks, and hoists to move, raise, rotate, and position large weldments and their fixtures into position for welding are dangerous and inefficient. Cranes and fork trucks are designed to move material from location to location, not to flip and change the orientation of large parts frequently. Hooking large, heavy weldments and fixtures to chains, forklifts, and cranes poses serious hazards to welders and operators if they fall or swing uncontrolled. This happens when chains slip, straps break, and cranes get damaged. Fork trucks aren’t built to play catch with parts.

Additional costs are incurred when damaged cranes have to be repaired because they were used differently than they were designed to be used. Fork trucks aren’t built to play catch with parts as they are rotated. Forks can slip, bend, and break, causing fork truck damage and downtime. Not only can equipment get damaged, employee safety can be jeopardized as well. Positioners eliminate those hazards because they remove the need for chains, straps, hoists, and cranes to lift and rotate assemblies and weldments.

No More Ladders, Scaffolding. The real safety improvements come from removing the need for welders to use ladders, scaffolding, lifts, and other equipment to climb on a part or lie on the ground to work. Welders and operators feel safer knowing that they are working with equipment that is specifically designed to lift, rotate, and hold their parts securely.

Lower Accident Rate. On average, companies report a significant drop in OSHA-reportable incidents with their use of positioners. As experienced employees leave and new employees come into a company, the “tribal knowledge” of how a part should be rigged and rotated sometimes gets lost, leading to potentially dangerous situations.

Just because employees are really good at rigging and rotating a weldment with chains doesn’t mean that they should be—and there’s no guarantee that they’ll be around tomorrow.

Attracting, Retaining Workforce. There is a lot of movement in the current workforce when it comes to hiring and retaining welders. Ergonomic improvements are an intangible benefit that positioners bring that can boost a company’s ability to attract good welders.

The average age of welders continues to rise across the country, and welders are in short supply. Using positioners can have a direct impact on your welders’ happiness and willingness to work. Instead of having to climb up and down a ladder, weld overhead, or kneel on the ground, a welder can work comfortably and feel better at the end of the day. That alone will help overcome the “This is the way we’ve always done it” mentality that can mount initial resistance to change.

Older, more experienced welders are able to work easier and quicker. This can help to keep them in the workforce longer.

Many companies now have ergonomic departments that look for ways to improve working environments. Positioners allow fabrication companies to protect their employees from injuries and also allow workcells to be easily modified for different employees.

Work Conditions Improvement Case Example. Chesapeake Yachts, located in Chesapeake, Va., installed a weld positioner and backbone fixture in 2017 for welding boat hulls (see Figure 2). The boat hulls can be over 70 feet long and 16 ft. wide, making for a very large piece to build and handle.

The positioner enabled the employees to work longer hours comfortably. The typical workday was extended by two to three hours because the welders weren’t as tired and sore from climbing up and down ladders and using floor creepers to weld under the weldment. As a bonus, the first time Chesapeake Yachts used the positioner on a weldment, it saved 3,000 labor hours.

2. How Do Positioners Increase Throughput?

Less Time Wasted. Not only do positioners keep welders safe while performing welds manually or with integrated assistance, the good news is that they do so without slowing production rates or increasing costs. In fact, positioners increase productivity because they remove wasted time.

Maximum Arc Time. A lot of arc time is lost when welders have to stand around waiting for cranes or while rigging a fixture to move it. In addition, cranes and rigging require several people to help rotate a large part. It may need to be moved several times before it is in the proper orientation. Using a positioner allows the operator to safely speed up the handling portion of rotating a part and orient that part for the best weld access. This saves labor hours and increases the welder’s arc time.

Labor Savings Case Example. A fabricator had to rotate a large weldment twice to complete the welds. In that facility, two fork trucks plus two spotters were required to lift and flip the part—a total of four employees (see Figure 3). The average handling time was 45 minutes to set up and rotate the piece. Multiplying that time by four employees equals three labor hours. Because the company had to rotate the piece twice, six labor hours for that one part were consumed.

When the fabricator installed a positioner, the same part could be rotated twice in a total of four minutes. They realized a labor savings of five hours and 56 minutes. Plus, because the positioning could be done by only one employee instead of four, the three other employees were free to perform other work.

This reduced, non-value-added labor is the true definition of doing more with less.

Correct Orientation. Production improvements can be gained just by moving the part into the correct orientation. With the weldment positioned properly, a welder can avoid having to weld overhead, vertically, under, or in other awkward positions that hinder productivity. Positioners that allow the welder to access parts in a better and more comfortable position empower him or her to deposit more material at a quicker rate.

Robotically integrated positioners allow for even greater improvements in productivity because robots can weld at a much higher travel speed than a human can. A good rule of thumb is that a skilled welder can weld at about 12 to 14 inches per minute using gas metal arc welding. A robot can travel at 20 IPM conservatively. So the robot is welding 50 percent faster and does not require the breaks, vacation time, and sick days that a person needs. Robots also have very high repeatability because the weld program tells the robot what to do and how much weld to deposit. As long as the weld development program is correct, the robot will not miss welds and will put the same welds in place each time.

3. How do Positioners Improve Weld Quality?

Optimal Proximity, Visibility, Arm Position. What about quality? Quality and ergonomics go hand in hand. With positioners helping to put the work in the best possible orientation, the welder can make better welds.

Welding OEMs advise that a joint in the 1F or 2F position allows for better penetration and improved deposition rate. A 1F position is a fillet weld that holds the joint at 45 degrees and allows for the best deposition rate. It is the easiest joint to weld. A 2F position is a flat fillet weld at 90 degrees. Orienting the part in either of these positions will result in better welds. Also, with the part in a better position, it is much easier for a welder to make sure that welds aren’t missed.

Positioners improve weld quality because they position the joint in the same place at a comfortable reach with good visibility. This facilitates consistent, repeatable assembly procedures. 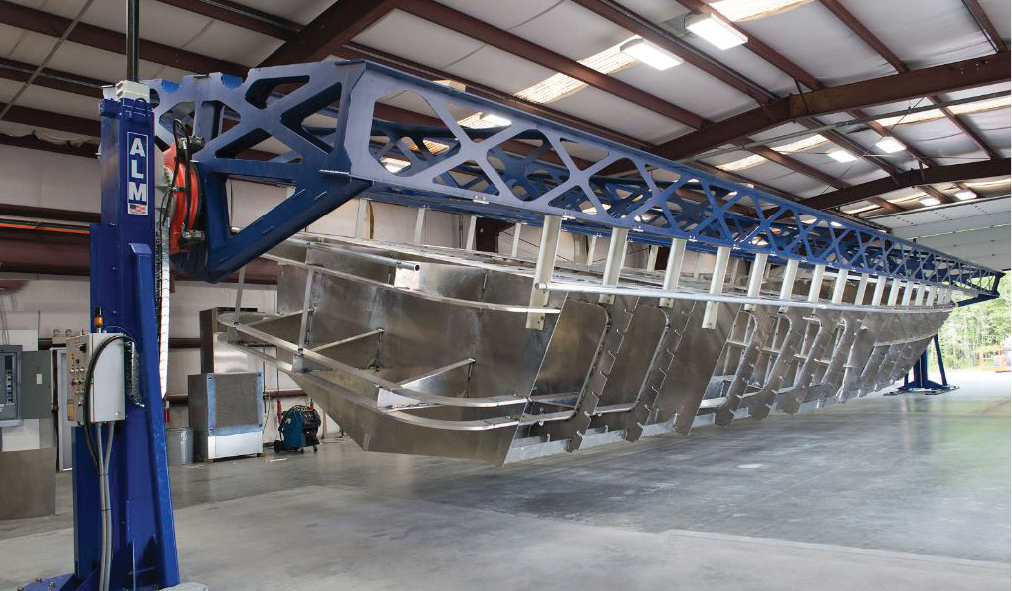 Positioners also simplify weld and assembly tool access because they can rotate the weldment 360 degrees, so clamps and contact points are easier to get to and can be easier to operate. Intelligent positioners can be integrated directly into weld management software that verifies weld quality and weld count, ensuring that all welds are made and recordable.

Fabricators that install their first positioners usually realize the benefits within the first days. Production starts to increase. Welders realize that they can do more while being safer and less fatigued. Company management wonders why it had not gotten positioners sooner.

As technology improves, so do positioners’ capabilities. They can often be upgraded as fabricators further modify their processes.