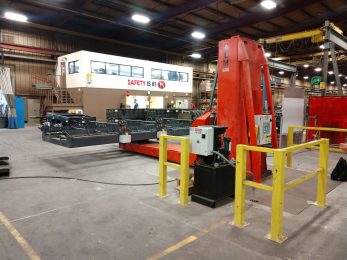 Great Dane worked with ALM Positioners on a new way to rotate the trailer suspension during the build process, with a goal of improving the overall safety of the operation and increasing efficiency. Photo: ALM Positioners

WHILE looking to improve safety and efficiency throughout its man­ufacturing operations, Great Dane considered different ways of rotat­ing the trailer suspension during the build process. More specifically, the company wanted to replace the chain hoist system used to attach bogie axles to the trailer frame.

The challenge was to come up with a system to lift and rotate the bogie that also would:

“They were familiar with our prod­uct for standard welding applica­tions,” Colten Brunenn, the ALM technical sales engineer who worked on the project, recalls. “After multiple conversations and discussions, we reviewed nine concepts as we worked through all of the different capacities, all the different models of trailers, the layouts at all of the facilities, and finally came to a conclusion. With a project of this scale, we knew that it was going to take some time.”

Great Dane chose ALM’s three-axis skyhook for assembly applications. The system features additional safety functions, with sensors and switches to ensure proper positioning before operations can proceed. The position­ers were delivered in Q4 2018. The installation process posed the usual obstacles for such a complex project. Brunenn points out that cus­tomers do occasionally want to dupli­cate a solution at another facility, but six different plants in the same time frame was “pretty unique.”

“The variability in the facilities was a challenge-every facility does things slightly different,” Brunenn says. “Overall, it went very smoothly.”

Great Dane Director of Manufacturing Engineering Alan Whiten concurs.
“We did encounter some height issues in two of our refrigerated trailer plants,” Whiten said. “The equipment design is very flexible and accommodated most of our layout needs without any modifications.”

“The positioner is as adaptive as the fixture allows it to be,” Toft says. “If we have a customer that’s a trailer manufacturer with trailer bodies that go from 33 feet out to 52 feet on the same line, and we know that upfront, we can offer a solution with an adjustable tailstock. Or we have customers that have an applica­tion where they’ve put a drop-center between the headstock and tailstock that are fixed on the line or in the cell. The actual fixture adjusts for the different lengths of the part. In other applications, you’ve got independent tooling and they’ll just move the tail­stock for the different lengths.”

Generally, positioners can be catego­rized as single-column, headstock/ tailstock, three axis, or drop center, Toft explains. A positioner, holds, lifts, and rotates a part or tooling “like a chicken rotisserie” for assembly, welding, or inspection. Positioners are typically used to replace material handling methods that utilize some combination of cranes, hoists, and forklifts along with chains and straps to lift and rotate assemblies

The application of the positioner is to securely hold the part or weldment and properly position for welding, assembly or inspection. Additional ergonomic and safety improvements come from the removal of ladders, scaffolding, and lifts to support weld­ers and operators.

“We’ve come up with creative solu­tions to adapt our equipment into the required manufacturing scenario,” Toft says, adding that while ALM is a positioner manufacturer, it now is known for its comprehensive cus­tomer solutions, of which positioners are a critical piece. “We utilize a lot of our equipment to do neat things, working a lot with design-and-build companies and integrators.”

Additionally, ALM’s utilization of hydraulics has been a differentiator in the market, offering smaller foot­prints and faster speed, Toft notes. In 2019, the company received a patent for a hydraulic positioner precision control system to support automated and robotic applications. 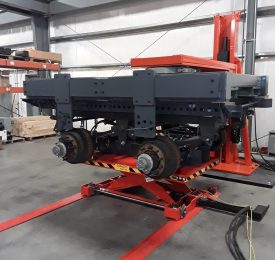 The small footprint is a key feature of the ALM hydraulic positioning solution.

ALM works both with customers who, like Great Dane, want to improve the efficiency or safety of exist­ing processes, as well as with custom­ers who are “starting from scratch” and in the early phases of facility planning and design, Brunenn adds.

“But in the long run, 90% of the time when we do improve safety, you’re also going to get additional benefits,” he says. “You’re going to increase your throughput, improve ergonomics, and reduce your over­head crane time.”

Two years in, Great Dane’s Whiten again credits the flexibility of the ALM system and its compatibil­ity with the variety of suspensions being installed on the trailers. “The ALM positioner improved the overall safety of the operation and increased plant efficiency,” Whiten says.

Direct Link to the Published Article

Link to the Full Magazine