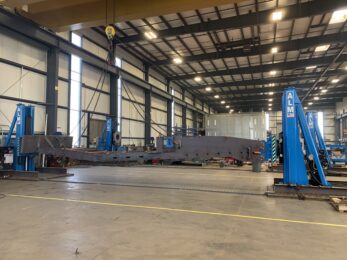 In early 2019, Joe Nara, Komatsu’s Sales Service Manufacturing Coordination Manager for Komatsu’s Crushing business, found ALM by a simple online search looking for a positioner. As a large company manufacturing large equipment, Komatsu needed a positioner with a heavy capacity. The timing could not have been more perfect as ALM was developing their Heavy Duty (HD) line of positioners ranging from 75,000 LB – 125,000 LB.

The frames that Komatsu manufactures are different sizes which led Komatsu to purchase two 100,000 LB. Headstock with Adjustable Rail Tailstock positioners. With such a heavy capacity, you would expect the footprint of the positioner to take up quite a bit of floor space. In most manufacturing facilities, there is not always extra space to use.

Joe mentions, “The ALM positioner has a significantly smaller footprint than its competitors, even at such a high capacity. Since we did not have the required amount of concrete, we had to add a 3-inch plate to anchor the positioner directly to the floor. Even with that plate, the footprint is still small.” 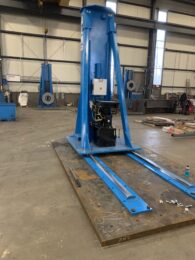 Benefits of the ALM Positioner at Komatsu

Komatsu’s overall goal in looking for positioners was to improve safety and productivity.  ALM offers area safety scanners; these scanners are designed to protect the operator from the positioner while the positioner is in motion.

When it comes to efficiency, Joe states, “The next benefit would be that we can move frames through our line faster. The positioner keeps our cost down and having a high-capacity positioner means that it can be used with the wide range of frames with which we work. Before we bought the positioners, the guys on the floor were using cranes to turn the frames.”

Joe stressed that before adding ALM Positioners, it would take 3 to 4 guys a minimum of 30 minutes to turn the frame. “It now takes about 4 minutes to lift the frame to the top and rotate it 360 degrees and back down. The guys out in the shop feel much safer using the positioners instead of a crane. Plus, using positioners frees up the overhead crane for other parts of the facility, and that in itself is another bonus.”

When asked about their productivity improvement, Joe answered, using the positioners has saved us around 100 hours per frame, which is a very significant improvement. As mentioned above, there is another savings, which is the ability to use the crane capacity in other areas of the facility (although this is a hard number to quantify). 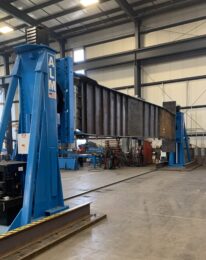 Joe mentions, “We have talked to ALM about robotic welding; that is where we would like to head in the future. The ALM system and electronics are far better than their competitors. The PNP system makes it easier to transition, and we expect that we will soon be transitioning to a fully programmable unit.”

During our conversation, Joe enthusiastically states, “We use these positioners as a part of our selling strategy, which in itself is important. We love bringing our customers into our facility to show them how the frame is coming out; they are instantly impressed. When they come in, they see the benefits of the positioners, particularly that their frames are getting completed faster. The President and Vice President of our division were also very impressed when they came in for a tour.  It was nice to see that their reaction was so positive. Showing them where we had made improvements, not only from a production standpoint, but safety as well, made it clear that purchasing the positioners was worth the investment.”

“The support and service have been timely. Overall, I am very impressed and have no complaints. I am excited to continue working with ALM in the future.” With two HD positioners in their lineup, Joe said that there is the potential of adding a third or fourth positioner in the future.